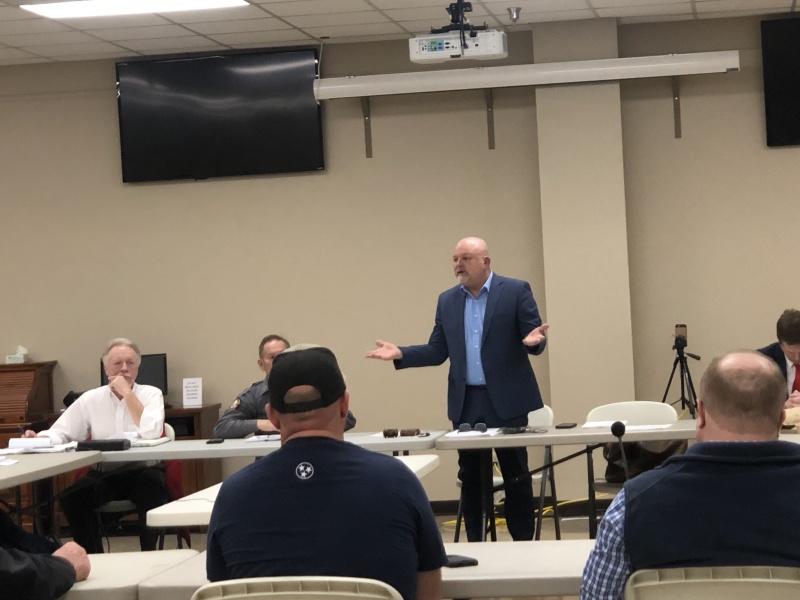 Two resolutions were passed at the full Commission meeting Monday, January 13. When Mayor Robin Brandon asked for new business, Commissioner Jan Black mentioned he had two items, which were two resolutions sponsored by Commissioners Brian Tiebor and Black, who stated, "One of these is a resolution to support the 2nd Amendment of the Constitution of the United States."

The resolution stated in part, "Whereas, the Second Amendment to the US Constitution, adopted in 1791 as part of the bill of rights, protects the inalienable and individual right of the people to keep and bear arms; and whereas, it is the desire of the Stewart County Commission to declare its support of the Second Amendment." The Resolution then cited several Supreme Court Cases affirming an individual's right to possess firearms, one such case, affirming a right to bear arms, stated, "unconnected with service in a militia, for traditionally lawful purposes, such as self-defense within the home; and affirmed that the right of an individual to 'keep and bear arms,' as protected under the second amendment, is incorporated by the due process clause of the Fourteenth Amendment against the states; and whereas, the Fourteenth Amendment to the Constitution of the US, section 1 states: 'no state shall make or enforce any law which shall abridge the privileges or immunities of citizens of the US; nor deny to any person within its jurisdiction the equal protection of the laws:'"

Brandon responded, "Commissioner I would like to say what you talked about in bill 0943, red flag law, that's disturbing. It's disturbing because it begins to chip away at our Second Amendment rights. I would like everyone to know that Stewart County would not be the first county that would enact the Second Amendment Sanctuary Resolution. Eight other counties currently have them, nine if you include an amended resolution by Green County. At best, the county would not use resources to enforce gun control measures that may be in violation of the Second Amendment. I'd like to hear what the Sheriff has to say."

Sheriff Frankie Gray sighed and said, "With the language, I don't think it's going to cause a problem with the Sheriff's Dept. It's not the Sheriff Departments place to really take a stand on this." Brandon asked County Attorney Charles Parks Jr. how much validity a resolution like this has at the state level. Parks responded with none and Brandon mentioned it was basically just making a statement. Parks stated, "Yes, it will be pre-empted by federal and state law so if there is a law handed down we would still have to abide by it." Gray told the Standard, "We have to follow what the law states and this is not a law or an ordinance so it doesn't change anything."

Tiebor mentioned it was a proclamation just like other proclamations and resolutions the commission passes. "It tells our State Legislators that we're a county that you just need to leave the Second Amendment alone," stated Tiebor. It was also mentioned by Tiebor that Stewart County is number one for gun ownership right now in the country. Brandon then asked County Clerk Jimmy Fitzhugh if he would consider the print out as a proper resolution. It was said a few things needed to be added to the resolution like a signature line. The Standard reported in June of 2016, the website, www.city-data.com, had a list of the top 101 counties in the country with the highest percentage of gun owners. It ranked Stewart County number one in the United States for the highest percentage of residents that keep firearms around their homes with a 64% rating. The list had Stewart County listed with a population of 12,370 which is from 2000, population from 2014 was 13,279 so we can't vouch for the authenticity of the results. Next in line was Fairbanks North Star Borough, Alaska with a population of 82,840 and a 59.1% rating, third was Nez Perce County, Idaho, population, 37,410 and a 59% rating. Montgomery County, TN was the closest county to us in the ranking at number 41 in the top 101 at 41.3%.

Brandon said, "As Commissioner Tiebor stated, Stewart Co. is number one in the nation for gun ownership, which means the average individual owns more guns in Stewart Co. than any other county in the nation. That's who we are and we're proud of that. I tell people it's no strange coincidence that we're also the friendliest county in the nation." The room filled with laughter. Commissioner Terry Fitzhugh said, "I say we protect our Second Amendment. People better take a stand."

Commissioner Melissa Fields asked Parks, "If the state bill 0943 is passed, the red flag law, that will require the Sheriff's Office to take action if somebody is to report?" Brandon responded, "If a judge signs an order." Fields mentioned it would be the responsibility of our law enforcement to go and enforce that law. Black added, "But if it passes at the state level, it overrides any resolution at the local level." A motion was made to pass this resolution, it was seconded, and all Commissioners voted yes except Howard Jobe and Jimmie Mullins. The Senate Bill 0943 summary states in part, "As introduced, authorizes the issuance of an extreme risk protection order that a law enforcement officer may seek to prevent a restrained person from being able to lawfully possess a firearm when the officer believes that the person is a danger to the person or another. - Amends TCA Title 39, Chapter 17, Part 13." The Bill passed on Second Consideration, and has been referred to the Senate Judiciary Committee. Jobe told the Standard by phone Wednesday night, he fully supports the 2nd Amendment. Jobe said, "This was a useless thing. I support the 2nd Amendment for the purpose it was originally intended and I don't believe it's in any danger. I couldn't see any point, purpose or reason for this proclamation." Jobe said he still doesn't see any reason for it, even after he's had time to think about it.

Black then stated at the meeting, "The second is a resolution of no Consent to Refugee Resettlement in Stewart Co. This has nothing to do with immigration, being anti-immigrant or anything of that nature." Black mentioned this was basically federal government coming into TN and having TN pay for the refugee resettlement. The Resolution states in part, "WHEREAS, U.S. State Department reports show that upon arrival refugees have previously been re-settled in locations including Clarksville, La Vergne, Smyrna, Murfreesboro, Mt. Juliet, Franklin, Spring Hill, Shelbyville, Gallatin, and Johnson City. WHEREAS, Governor Lee by letter dated December 18, 2019, to U.S. Secretary of State Mike Pompeo "per the terms of Executive Order 13888" has consented to "initial refugee resettlement in Tennessee: with no exemption for non-consenting counties. therefore, BE IT RESOLVED that Stewart County does not want to be forced into participating in the federal refugee resettlement program due to either Governor Lee's consent and/or being within the permissible placement radius of resettlement agency office. BE IT FURTHER RESOLVED that Stewart County requests that Governor Lee retract his consent for initial resettlement in Tennessee for both the the one year period of time as stated in his letter and/or the actual consent period required by Funding Notice."

Black stated, "The bottom line is we're paying for their healthcare, medical care which the US Government was supposed to be paying for but the tax payers of TN are paying for it and it's up to us whether or not we want the federal government to shove people into Stewart County and have us pay for them." Black mentioned a lot of counties in TN were passing this resolution. A motion was made, seconded, and discussion was held. "We should not be, as a county, forced to take any people on that the government wants to dump on us. If the government says they're going to get 3,000 people and resettle them in Stewart County, it's all on us. They aren't going to pay for it, we are. I don't think they should be able to do that," stated Tiebor. Brandon then mentioned the median income in Stewart County is about $46,000 and stated, "If we bring in refugees in our county, they're going to be on the welfare system. They're not going to speak English. We have enough people in Stewart Co. that we need to elevate out of poverty. We're not trying to bring more welfare recipients into the county." Commissioner Randall Redmon mentioned there isn't enough jobs, and Fields stated, "There isn't enough homes!"

Parks mentioned a concern, which was passing these resolutions could affect getting grants. A roll call vote was taken and all commissioners voted yes except: Jobe, Andy Luton, Clint Mathis, Mark Dortch, Mullins, Drue Shepherd, and Eric Watkins. The vote results were seven yes and seven no, so Brandon had the decision and voted yes. This resolution was passed, just as the first one. Both Resolutions have no legal standing, they are just a message to the state and federal government. Let's hope the messages are well received.