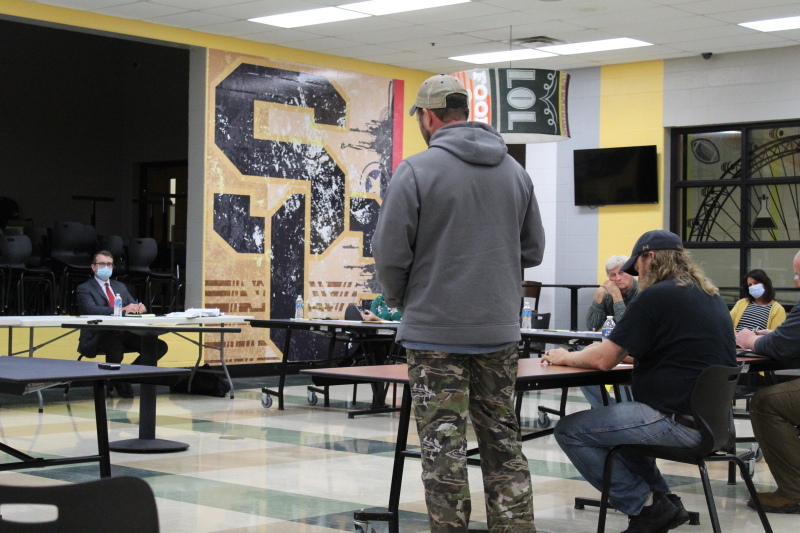 Former SCHS Guidance Counselor, Gayla Grise, filed a Civil Lawsuit in the US Middle District Court of TN, in Nashville, January 26. The Standard obtained a copy of the lawsuit last week. She was named as the Plaintiff, while Dr. Ben Duncan, in his capacity as principal of Stewart Co. High School (SCHS), Mike Craig, in his capacity as Director, and the entire Stewart Co. School Board were named as defendants. The suit reads, under allegations, "This is a cause of action brought for deprivation of property rights without due process of law, for wrongful discharge." Grise is claiming in part, "Defendants in their official capacity discharged her from her position as a tenured counselor at SCHS in violation of applicable statutes and rules governing teacher tenure. In addition/or in the alternative, Plaintiff was discharged in violation of applicable Federal and State statutes prohibiting wrongful discharge and/or retaliatory discrimination."

The lawsuit reads, "Grise is a tenured teacher as defined by statute. At the time of the events, she had been employed with the SC School System for approximately fifteen (15) years and worked as a guidance counselor for SCHS for school year 2020-2021." The suit stated, Ms. Grise has provided a detailed account of how grades/transcripts were changed and why such changes were made. It further stated, Ms. Grise did not make any unauthorized alterations to any student's grades/ transcripts. At all times, Ms. Grise acted as directed by her superiors and in what she understood was the common practice and procedure outlined by Principal Duncan and Director Craig, and understood that making changes to student's grades/ transcripts were a part of her regular job duties.

The Standard spoke to Ray Crouch, District Attorney General for the 23rd Judicial District about the case. He was unaware of the lawsuit brought in US District Court but told the Standard, "The case against Gayla Grise is being investigated by the TBI and will be presented to the next Stewart County Grand Jury." All Grand Jury meetings were suspended by order of the TN State Supreme Court due to Covid. The suspension will be lifted effective Monday, March 15, 2021. We spoke to Craig who said he was aware of the lawsuit but couldn't comment on any specifics of the case. He did tell us the insurance company for the school system hired the lawyer representing all the defendants named in the suit.

In an affidavit by Grise, filed with the District Court, it states, "The authority to make these changes was given to Ms. Grise by Principal Duncan and Director Craig." It was further stated, "Director Craig sent a report to the TN State Board of Education regarding Plaintiff's alleged misconduct, stating there was an 'ongoing investigation.'" Grise stated she met with Principal Duncan on Sept. 14 and 15, 2020 regarding grade changes that were made. She acknowledged making the changes and stated the reasoning behind each change. According to the suit, Grise said she did not understand why this was an issue since this was the standard method of operation and she had been instructed to make these types of adjustments to student's grades/transcripts. Principal Duncan advised that a Board Member had been alerted to the change made to a student's grade/transcript. Grise was informed later in Sept., she was suspended for thirty (30) days.

According to Grise, she did not receive prior written notice of this meeting, the allegations made against her, or of her suspension." In Grise's testimony in the lawsuit, she stated, "Part of my job as a counselor is to make the necessary changes to students' grades, transcripts and/or GPAs. Any and all changes were made at the direction of the administration and/or my supervisors. Prior to Sept. 2020, I made many changes to students' grades, transcripts and/or GPAs without any problems or issues. Over the course of my employment at the high school, the administration advised that making changes to students' grades, transcripts and GPAs was a part of my regular job duties. It was explained to me, in various ways, that part of my job was to make sure that every student graduated, and that the graduation rate was kept high. More specifically, I was instructed to change a failing grade to a passing grade or change a grade to the next highest letter grade, with the goal of improving students' GPAs. In most cases, a student's GPA was changed in order for the student to receive the HOPE scholarship. I was also instructed to add classes to a student's transcript in order to give them the necessary courses he/she needed in order to graduate. The practice of changing students' grades, transcripts and GPAs came directly from the administration. After being given the overall directives and goals (graduation rates, HOPE scholarships, etc), I was instructed and expected to make the necessary grade changes at my discretion. Making changes to grades, transcripts and GPAs was part of my job. I did not believe that I had any choice in the matter. If I did not make the changes, I believed that I would have been fired by Dr. Duncan and/or Director Craig. On Tues., Oct. 27 around 2:45, I texted Mr. Craig and we met at the Board office at 4:15. My sister (former Director of Schools) joined me for this meeting. Chris Guynn, the Technology Coordinator, was also in attendance. I told Mr. Craig that I changed credits at the direction of Principal Ben Duncan. Mr. Craig advised they had not looked at anyone but me in this case." (Former Director Leta Joiner was who Grise was referring to but her name wasn't mentioned specifically in the suit, that we could find, which was over one hundred pages.)

In Exhibit 1-B of the lawsuit, it states, "Grise received an undated letter from Director Craig informing her of the charges against her and advising that she was being suspended without pay." The suit states, in early October, "Attorneys for Grise sent an electronic message to Mr. Runyon, (SC School Board Atty.) citing that there were systemic issues of misconduct regarding the changes to grades/transcripts and the claims of wrongdoing." The statement in the lawsuit, read in part, "Ms. Grise received a third letter from Director Craig, which again, included new allegations of misconduct. The "evidence" against Ms. Grise was her alleged admissions to Principal Duncan during their discussions. Director Craig's October 23 letter stated he was now recommending Grise's employment with SCSS be terminated. The lawsuit also claims, "The Board met in a special session Oct. 29, 2020 regarding the charges. Ms. Grise was not provided with an opportunity to meaningfully address the charges and evidence against her as proscribed by federal and state law and was terminated from her employment with SCSS." The suit also claims, there was no meaningful investigation into Plaintiff's assertion that any and all grade/transcript changes were authorized and directed by Principal Duncan and Director Craig, that such alterations were the standard method of operation and such activity had been practiced for a number of years upon the direction and approval of both Principal Duncan and Director Craig [Director Craig had been Principal of SCHS prior to his appointment as Director of Schools]." In the special called School Board meeting, Oct. 29, the Standard reported, "Craig told the Board, 'On Sept. 22, we met back and looked at Skyward (Software used to record students grades), to make sure there were no other changes made, we did find there were some other changes made. Student C had three grades changed, Student D and E were transfer grades that were also changed. These grades had been changed without authorization. I recommend the dismissal of Mrs. Grise.' Board member Adam Lamb made a motion to go with Craig's recommendation. All board members present voted yes for the dismissal, except Lana Sanders, who abstained. Sanders told the Standard later, she abstained after being advised by the School Board Attorney, due to a distant tie to the Grise family through marriage. Grise was in attendance at the meeting but never spoke."

The lawsuit claims the defendants conduct was undertaken with malice or reckless disregard for or indifference to Plaintiff's federally protected rights and constituted a breach of her actual and/ or implied teaching contract and the conduct harmed and caused damage to Plaintiff and deprived her of her rights to procedural and substantive due process. All this led to the conclusion, according to the lawsuit, "As a result of the Board's arbitrary and capricious deprivation of her property interest in employment, Plaintiff has suffered economic loss, damage to reputation and severe emotional distress." We will publish the school's rebuttal as soon as it is available.