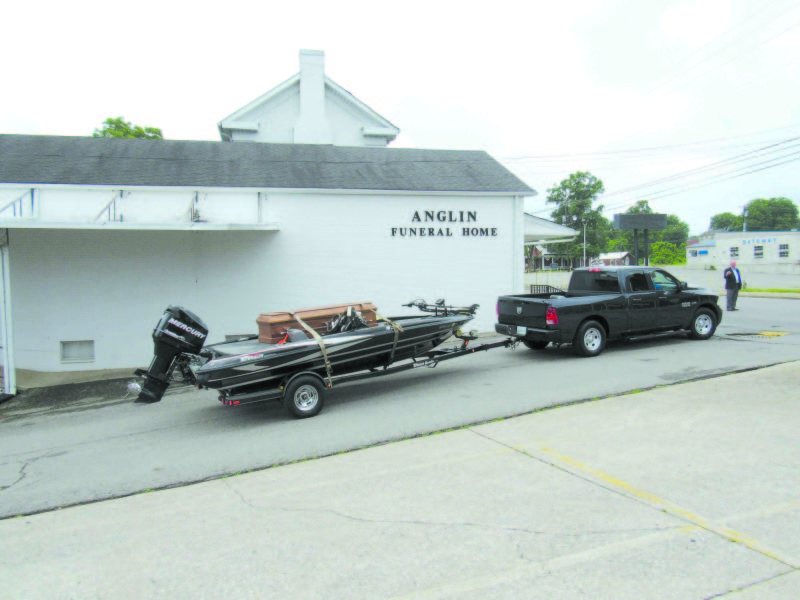 Kelly Walden drove Rickey Hale to his final resting place after funeral services Wednesday, June 15. Wife Judy Hale wanted his coffin carried on his boat as a final tribute to him.

Stewart County resident and avid fisherman Rickey Hale took his final boat ride and was laid to rest, Wednesday, June 15 after he passed away at his home Friday, June 10. His wife of 23 years, Judy Hale wanted to give him one last ride on the Triton Boat he won in the 'Big Bass Splash' Tournament in 2013. We asked her if we could take some pictures for a story in the Standard as there were many people who have shared a fishing trip over the years with Rickey. We also believe, as well as many in attendance, this funeral was probably a first for Stewart County. She agreed and called our office Monday morning. Hale talked about how quickly things progressed. "We didn't even have time to process what was going on. We just found out on April 26 he had a tumor on his lung after he was complaining of back pain," she said. "The day he died, that morning he had a fishing buddy come by. I told him I would love to give him one last ride on that boat. He said, why don't you." Hale said she talked to Anglin Funeral Home about the arrangements and they agreed, "They were a little nervous about us going that far but got the permit we needed to transport him across the state line." Owner Wayne Anglin said, "We do everything we can to accommodate the families we serve." Hale was buried in Fountain Run, Ky. next to his father. According to his wife, their sons, sons in law and Rickey's friends and fishing buddies got the seat out of the boat to make room for the coffin. The boat was backed around to the back of the funeral home and the coffin was loaded onto it and strapped down. Hale's fishing partner, Kelly Walden, who works at US Bass and said he has fished with Hale probably a million times, drove the boat on the three hour trip to the gravesite. Judy said he told her it would be an honor and Walden said he was proud to do it. When Hale talked about her husband, she added, "He was so special, fantastic husband, father and person. He wouldn't hesitate to do anything for anybody. He was so proud of that boat, I thought it would be a good way to honor him."